Pruning Honeysuckle - Lonicera. How, When to prune

Honeysuckle Pruning. If honeysuckles are pruned wrongly, then it could mean the loss of flowers for the following - or present - year. Pruning of honeysuckles is relatively easy, though can be a bit messy if pruning a neglected climber that has wrapped itself around an old trellis or frame for the last ten years!

Most will know Lonicera as climbing shrubs - better known as Honeysuckle. However, there are also a group of Loniceras - or Honeysuckles that are actually grown as shrubs.

Needless to say, there are different pruning regimes for both types. If you prune - and it in not always essential - then ensure that you carry out your Honeysuckle pruning at the right time of year.

When to Prune Honeysuckle - Lonicera

The main criteria is that all climbing Lonicera should be pruned back immediately after flowering each year. The difference in pruning techniques are explained below, but one of the most important aspects is, when to prune a honeysuckle. Get the timing wrong and you will lose flower growth. Honeysuckle climbers are relatively easy to prune - the most important factor being correct timing. If you have the space for them to grow into large climbers, then pruning should only be required by way of trimming back to fit the space that you have to fill.

If your space is restricted - or you want to keep it under some sort of orderly control, then most climbing honeysuckle vines can be cut back quite hard in the late winter or very early spring each year. They will then flower on the new growths sent up in that season.

These new growths - vines - will often reach 2metres in length, so it will re-cover a good size trellis during the year.

These varieties tend to flower on growths - wood - made the previous year, so should be cut back after flowering - to size determined by the available space. In any event they should be cut to just above a strong new growth that will be sprouting from below the flowered area.

The evergreen Lonicera japonica types - including Lonicera japonica Halliana - do not actually require pruning - other than trimming to size. Again this should be done in early spring. Summer is too late - you will lose the flowers for a year.

All old climbing honeysuckles can be given a new lease of life by this method of honeysuckle pruning. Most can be cut back hard in early spring. The size of the main trunk will determine how hard back they should be cut. If large - more than 3in (75mm) then best tp cut back the branches at the first fork. The climber will soon shoot out and you will be blessed with a 'new, fresh-looking vine. This is Honeysuckle pruning and not simply trimming Honeysuckle! 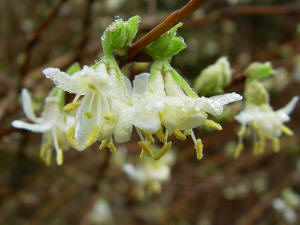 The shrub type honeysuckles - Winter flowering Lonicera fragrantissima types - or summer flowering Lonicera tatarica types, can be pruned back to a strong new growth, immediately after flowering. So the time will be dependent upon the flowering period of the shrub. If pruning is to take place, then the 'after-flowering' advice is important.

If you cut the winter flowering types back in mid summer - or later - then you are effectively cutting off the flower buds that would normally have given you such pleasure in mid-winter.

Likewise, if you prune the mid-summer types too late in the year - or worse - in the spring, then again you will forfeit the flowers for one year. Both winter and summer flowering shrub - bush - honeysuckles need time to develop flower buds on their new growth.

Gardening Gloves for Women and Men

Most Read Pruning Articles are