Everyone has their own particular favourites - and we are no exception! We list our top ten gardening favourites. You can help us to maintain this section by having a say on what you think should be included! After all, the information is for you!

The plants and things listed are simply our preference - at the time. Things and preferences change regularly in the garden - People have different perceptions of what is 'best'!

We are not saying that these are 'must-haves'. It is simply a section about the plants and gardening 'things' that we have found to be dependable over many years. There are many new varieties of plants available every year. They need time to be assessed in normal garden situations. So basically, it is a list of old favourites!

So - let us know if you feel that you have a better suggestion (or two) for any of our top ten lists. We can see what users are looking at and what is popular

A great Top 10 from our best Climbing plants Climbing plants are a good option for increasing the plant population in the garden without taking up too much extra ground space. They are essential for any ideas you may have about trying Vertical Gardening.

Vitis coignetiae is a member of the grape family Vitaceae but does not have edible fruit. Instead, it is graced with spectacular heart-shaped leaves up to 12in long, though normally 8-10in. Its common name of Crimson Glory Vine is because of its stunning autumn colour with shades of gold, orange and deepest red. 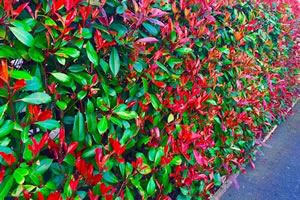 Photinia Red Robin is an evergreen shrub/tree incleasingly popular, not just as a standalone shrub but it is taking over from the Leylandii as a popular hedgerow. As an evergreen shrub, it does standout with its striking bright red young foliage which is its main feature.

There have been some confusion over its family name, it may be found or listed as "Stranvaesia Red Robin". Photinias are members of the "Rosaceae Family" of trees and shrubs, having the typical small flowers each being made up of 5 typical single rose flowers, but much more smaller.

Award winning Acer Palmatum Emerald Lace is one of the most popular Acers. The Emerald Lace has received the "Award of Garden Merit" by the Royal Horticultural Society for its outstanding qualities. The Acer Palmatum Emerald Lace boasts a deep dissected foliage, Lace Like, which bursts into life in the spring with a bright lime green colouring. In the summer the leaves become edged with a faded red colour which gradually spreads into the center and turns red and orange in autumn. 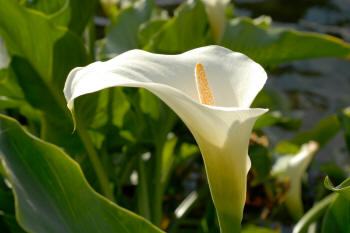 Zantedeschia - The Arum Lily which now it has been hybridized, is available in a multitude of colours other than the pure white original. We distinguish between the two basic types of hardy and tender. The hardy types are normally referred to as Arum Lilies, whilst the tender varieties - which can still be planted outdoors for the summer - are grouped as Calla Lilies.

Arum Lilies grow from tuberous roots or rhizomes, and the two main types of Zantedeschia aethiopica and varieties, together with Zantedeschia pentlandii and cultivars are the hardiest being classed as bulbous perennials. They have erect or semi-erect stems of flowers and foliage. The flowers of the Arum Lily are the main attraction, but the leaves are also we worth considering for any planting scheme where Zantedeschias can be suitable grown.

The Solanum Jasminoides Album is not quite a climbing shrub more of a scrambling evergreen shrub that can be trained to grow up a fence, wall or over a pergola. It has a very long flowering period, it will start to flower in July and can still have flowers in late December. It Blooms fragrant star-shaped, bluish-white flowers with tiny, yellow centres which are around 2.5cm / 1 inch with dark green leaves. The White Solanum Jasminoides Album flowers longer than the more popular blue version Solanum Crispum Glasnevin, both are very fast climbers, they will grow approximately one meter a year. They will grow in virtually any soil and in any light conditions, if you plant in the shade it will clamber towards the sun.

One of our top ten Hardy Ferns.
You do not need a dark damp garden to plant a few ferns - though shade certainly help in most cases - and who doesn't have a shady spot somewhere? We are lucky enough to have one of the UK's top Fern expert to have written this list for us. Not all ferns are good for shade - but many are.

All gardeners will have their own favourites for shrubs that flower in the winter. I am no different! I am being cruel to myself in trying to decide upon which are 'my best ten winter flowering shrubs. It is sheer stupidity on my part, for winter in the garden is one of my favourite subjects. Already I know this list is doomed to wanton expansion through lack of discipline, so please forgive.

Many winter-flowering shrubs also have other attributes, but I will restrict myself to the subject matter - most of the time! There will of course be disagreement as to what shrubs should and should not be included. In that respect, I will have enough problems with my own choice, but suggestions always welcome!

Best ten favourite plants for attracting Butterflies. We are all starting to get interested in wildlife in the garden. Butterflies have a bad name because of the caterpillars that are their offspring. Lose the odd plant leaf - or lose butterflies. Let's plant an extra plant or two. Don't forget that the caterpillars are part of the food chain for many beneficial visitors - birds and frogs included!

Clematis cartmanii Avalanche - One of our Best Ten Evergreen Climbing Plants - Always in the favourites list.

Clematis Armandii itself - a winter flowering scented type that is vigorous once established. Distinctive leaves, with quite a dense covering, so suitable for screening. One of the Clematis armandii types is Cl.a. Apple Blossom is very popular and differs only in that it has pink-tinged white flowers, which eventually fade to white. Both have gorgeous scent and the glossy - waxy - leaves give good screening. Not really suited to container growing as roots need plenty of space. Both are best suited to either full sun or light shade. I have also seen them quite successful on a north facing fence - but with less flowers. No pruning required.

Many think that Clematis are hard to grow. They have a few quirks - don't we all. This is best how to care for clematis. Plant them in the right place, read about how to care for them and simply enjoy your evergreen or deciduous climbing clematis Always a big 'Oooo' factor with clematis

Best climbing are still one of the favourite garden plant - and no wonder with that show of striking colours in the summer. Choice of climbing roses not always easy. We give you our best ideas. Climbing Roses and Rambling roses are often confused. They are similar - but so different!

Climbing roses are better for growing against a wall than Ramblers. They are less likely to suffer from mildew because of the poor air circulation. Climbers can also be grown against a fence or through a trellis.

If grown against a wall, then train along galvanised fence wire strung between vine eye nail driven into the wall. The aim will be to get as many horizontal rose shoots as possible.

Climbers are often allowed to grow vertically - as is their normal habit. However, if grown in this way, then there are fewer shoots, resulting in fewer flowers.

Learn - all aspects of lawn maintenance, how to build and maintain a pond, care and grow vegetables and fruit, fit for your table.

Identify Weeds in The Garden - How to deal with weeds. Diseases and Pest which harm your garden and plants, learn how to prevent, deter and erradicate your garden problems.

Pruning Guide. Shrubs flower better with correct pruning. Many illustrations and examples of what to do - and when. Includes evergreens, roses, flowering shrubs, spring flowering shrubs and pruning for stem effect. This is our most viewed and comprehensive section,

Gardening Businesses listed in the UK counties and USA states. County and State Listings of businesses involved in Garden supplies and services. If you wish to be added to the Directory, please send us your information. Having problems, use the search box

In this section you will learn about Gardening Basics, Containers, Landscaping, Propagation and Soil.

Gardening Gifts and Reviews, Read Before you Buy